Vitiligo: when skin loses its pigmentation

On average, vitiligo affects five out of every 1,000 people, without distinction of gender or skin colour. Falsely accused of “whitening” his skin, pop star Michael Jackson actually suffered from this disease. The good news is that this condition is neither painful nor contagious. 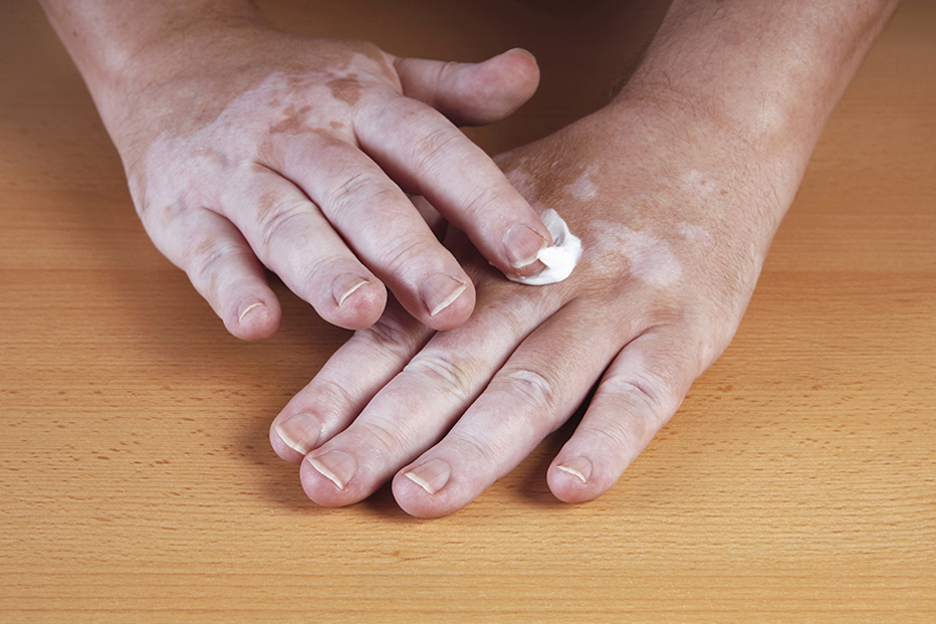 The word “vitiligo” is derived from the Latin vitulum, which means “white patch.” In older times, such “white patches” were often associated with leprosy, and to this day, the fear of contagion has still not completely disappeared. Vitiligo is a disease that causes skin discoloration in several areas of the body. For those who suffer from it, it has a major impact on self-perception and self-esteem.

Vitiligo affects both men and women, and often develops before the age of 20. Vitiligo is characterized by a complete depigmentation of the skin that leads to the appearance of white patches, mainly on the face, neck, hands, legs and feet. The disease is believed to be hereditary. Other factors are known triggers of vitiligo, such as:

However, the exact mechanisms of how this disease develops are still unknown to this day.

How can I find out if I have vitiligo?

A vitiligo diagnosis is most often given by a doctor or dermatologist after a simple skin examination. There is rarely a need to do a biopsy, but blood tests can sometimes be required to make sure that the symptoms are not caused by any other auto-immune disease.

Note that people who are affected by vitiligo generally don’t have any other symptoms aside from white patches; they do not experience pain, itchiness or discomfort.

Can it be cured?

Vitiligo cannot be cured; it is a chronic condition that lasts throughout one’s life. However, there are several treatments available to limit the size and quantity of depigmentation patches. Consult your doctor or dermatologist to determine which measures might be appropriate for you.

Here are a few tips to avoid the propagation or appearance of white patches on your skin:

Because issues of aesthetic nature can lead to loss of self-esteem, psychological distress and decrease in quality of life, you should consider getting psychological help. Among other things, psychotherapy could be useful to help you learn how to better manage this condition.

If your skin is affected by vitiligo, there is no need to worry; the disease does not present any risk for your health or that of your loved ones. Skin colour is only a tiny part of a person’s beauty, so keep in mind that individual personalities far outshine our appearance and, especially, all of our minor imperfections. After all, those very imperfections are what make each human being so unique!